The Oil and Gas Climate Initiative shared a case study about our successful partnership with Triple Crown Resources, hosted on their website and shared below.

“There are 10 or 15 different reasons why businesses should detect and fix methane leaks, but one that even the most skeptical exploration and production (E&P) companies can agree with is that it can be profitable. This is the cheapest gas you can find,” Ryan Keys, President of Triple Crown Resources, says. “Abating greenhouse gases gets most of the attention, but there’s a lot more to this.”

Triple Crown Resources is an independent, privately-held E&P company based in Texas– and also a rare upstream oil and gas producer to have gone public about its gas leaks. Triple Crown commissioned Kairos Aerospace, an OGCI Climate Investments’ portfolio company and a leading provider of methane detection and mitigation solutions for the energy industry, to do the first aerial survey at the end of 2020.

Up until that time, Triple Crown – just like its peers – had been sticking to the decades-old rules and reporting its methane emissions by using U.S. Environmental Protection Agency’s (EPA) emissions factors. “It’s a spreadsheet: you put your numbers on it and apply the emissions factor,” Keys says. “Our resulting numbers were very good, as we had already bought all the right equipment which affects EPA calculations. We had everything we need to keep that number low. We were proactive about that several years ago.”

“But when we received the results of the first survey from Kairos, we were horrified by what we found,” he continues. “We have very new infrastructure, as do a lot of other folks in the Permian basin. So, we were confident our leaks would be negligible or nothing. Not even close. We were leaking about 3.5% of our gas production. And if this happened to us, it has likely happened to everyone else in the Permian and other oil basins. Maybe we are just one of the first to publicly admit this.”

Every company Kairos Aerospace has given a report to is surprised by the number of its leaks, Steve Deiker, the company’s co-founder and Chief Strategy Officer says. “The problem is that emission factors are not that accurate, as they are often based on a very small sample size of equipment measured long ago,” he points out. “The other problem is the fundamental idea behind it, which is you are assuming normal operating conditions, but most of the gas escapes during abnormal operating conditions.” And sometimes all the equipment is operating as designed, but it is put into conditions it shouldn’t be in: for example, the pressure is too high, often leading to safety valves releasing the gas.

“When we received the results of the first survey from Kairos, we were horrified by what we found. We were leaking about 3.5% of our gas production. And if this happened to us, it has likely happened to everyone else in the Permian and other oil basins. Maybe we are just one of the first to publicly admit this.” – Ryan Keys, President & Co-founder, Triple Crown Services 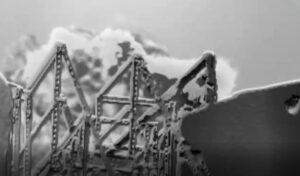 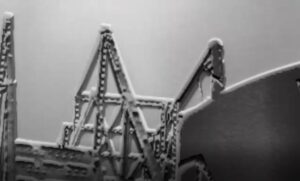 Images: Actual before and after optical gas imaging from one of the Triple crown sites where Kairos helped find the leaks coming from a tank battery.

“What the entire industry has been doing is using estimates, which are not measurements,” Deiker says. “But you can’t improve something if you don’t measure it.” And for companies like Triple Crown, methane detection –identifying, acknowledging and quantifying the issue – is just the first stage, Triple Crown’s Keys says. “Actually fixing it – and ideally creating a process of not just looking at the data and reacting to it, but being proactive on preventing leaks that might happen – that is probably the evolution most oil and gas companies want to get to,” he adds.

Triple Crown is now commissioning these surveys every six weeks– if only to gather more data, so that it can better understand the issue. “Maybe that is overkill, but we are OK with it, because the costs are so low,” Keys says.

“We can easily justify it: as long as the costs are maintaining our flat baseline, we know we are making more money, we are selling more gas. Our leak detection and repair program is paying for itself many times over.”

In fact, right after fixing the leaks after the very first Kairos Aerospace survey, Triple Crown realized it had just made a lot of money. “That is quite simple: it is a revenue item. We started treating it like a project, just like a new well – this is our cheapest gas that we can find. Instead of drilling a new well, let’s find gas that is leaking. It’s like a well that doesn’t decline, which is perfect – it has outstanding economics,” Keys says.

The first leak detection and fixing campaign cost Triple Crown $23,675, but it generated $139,375 in additional gas revenue in the first month alone, resulting in a 5.1-day payback for the project. Over the first four months, Triple Crown’s resulting extra profit amounted to $400,561.

“It is rare when there is something an oil and gas company could do and everyone wins, including environmentalists, but based on this economics there is no reason that this industry can’t put a huge dent in our methane emissions within a couple of years,” Keys says. “The costs are almost negligible compared to the found revenue, and I can guarantee most companies out there are leaking a lot more than they think – certainly a lot more than those EPA standards indicate. We certainly were, and there is nothing special about Triple Crown in this regard,” he concludes.