Last time we talked about methane emissions, we focused on the basics of the commonly used units of measure.  We found that there are two common units of measure in use: rate-based measures such as standard cubic-feet per hour (SCFH) and kg/hr measure the amount of gas leaking over a period of time.  Concentration-based measures such as PPM  and PPM-m.  These units measure the amount of methane in a volume of air.  One of the main learnings from this discussion was that rate-based measures are more appropriate for measuring leaks, and help us answer questions such as “How much gas am I losing per day?” which are important in leak detection and repair.  Concentration-based measures, conversely, help us determine things like the safety of a work area, by letting us know if the local concentration of methane could lead to health or safety issues.

In this post, we’re going to look a bit more closely at the physics of these units, why they are so difficult to compare, and what kinds of measurements they’re good for.

A frequent question we get is “How can I compare the sensitivity of measurements in concentration units (e.g. ppm) to instruments that measure leak rates (e.g. kg/hr).  To first order, the answer is: you can’t.  Consider a drop of ink that has just been added to a glass of water, and is beginning to diffuse into the liquid slowly. 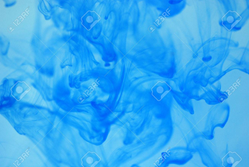 It is clear from the photograph that the concentration of ink is different at different points in the glass.  A concentration measurement taken at a single point would not be a good way to estimate the total amount of ink.  In the case of a gas plume, the issues are even more complicated. 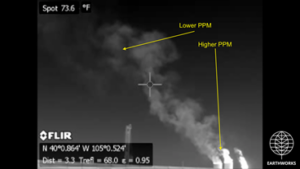 This is a methane plume image captured by an optical gas imaging      (OGI) camera.  Not only does the concentration vary depending on the part of the plume that’s measured, but the measured concentration      is also strongly dependent      on how fast the wind carries the gas away from the source.  In order to get from here to an estimate of a total leak rate, one would have to measure the concentration across many different points in the plume, and use this to try to reconstruct a model of the shape of the plume.  While this is possible, it’s obviously beyond the capabilities of a single technician using a single hand-held device.  And, if the plume is changing over time (as it does when the leak rate changes     , and/or the wind is changing), the picture is complicated even further.

Essentially, the difference here is one of taking a point measurement, versus a statistical average over the entire plume.  A leak rate is a statistical measurement about the average amount of gas escaping over time.  Operational and climate impact require knowledge of the overall leak rate, to answer questions like “How much money is this leak costing us?” or “How bad is this leak for the climate?”  For this reason, ppm isn’t a good measure of climate or operational impact, because it can’t be used to determine the amount of gas actually escaping.  Furthermore, because ppm measurements are captured at a single point in space and time, they are inherently ill suited to comparison across different instruments, operators, and processes.

The desire to focus on PPM for regulatory compliance is understandable, because it’s simple to measure using hand-held tools.  But the misunderstanding of concentration versus leak rate measurements has led to a number confusing outcomes in recent years. For instance, the EPA’s own leak detection rule for the upstream and midstream oil and gas industry, known as New Source Performance Standard (NSPS) Subpart OOOOa includes a 500ppm definition of a leak. As we have seen, this unit of measurement is simply poorly suited for standardizing compliance across technologies and varying ground conditions.

But, more importantly than just the issue of which instruments to use, or what units to use, developing an understanding and intuition for the underlying physics of these processes and instruments helps us interpret the data that we can collect, and hopefully guides us towards a better understanding of the most important problem of all: keeping our coworkers, neighbors, and planet safe.